ACTION:  Send an email (click this link or see below) to the Planning Commission by Thursday, November 8:  Stop ignoring our community!

It’s time to show up for Divisadero.  Tell the Planning Commission that they must stop ignoring our community!

Enough is Enough
The developer of 650 Divisadero plans to build 80% of the units as market rate units, which in today’s San Francisco, means totally unaffordable to most neighborhood residents.

When this project was proposed in 2015, it was only going to provide 9 units of affordable housing out of 66 units.  Thanks to our advocacy, the project will now likely include at least 20% affordable, but that is still not enough.

Tell the Planning Commission: Continue this hearing until the Divisadero legislation is finalized.

Send an email to the Planning Commission:

We support affordable housing for our neighborhood, done right.

Continue the hearing for 650 Divisadero until the community’s concerns are addressed in the affordability legislation proposed for Divisadero NCT and Fillmore NCT, which goes to the Board of Supervisors on Tuesday, November 13th.

Stop ignoring our community!  Continue the hearing for 650 Divisadero.

650 Divisadero started as a 16-unit proposal, a development that included refurbishing the the 1920s building facade and for adaptive reuse. After Supervisor London Breed rezoned Divisadero and Fillmore as NCTs, 650 Divisadero re-submitted their plans to go from 16 to 66 units. They now want to demolish the entire existing building.

Our Demand:  Include more on-site affordable housing in exchange for taking advantage of the density giveaway from the 2015 rezoning.

Affordable Divis has now waited over two years for a higher affordable housing requirement for 650 Divisadero.  When Supervisor Breed refused to rescind her NCT legislation, Affordable Divis responded by holding community meetings and a neighborhood forum in December 2015 to create the Divisadero Community Plan.

In 2014, Mayor Ed Lee pledged to build 30,000 homes, of which half would be affordable. According to the Mayor’s Office: 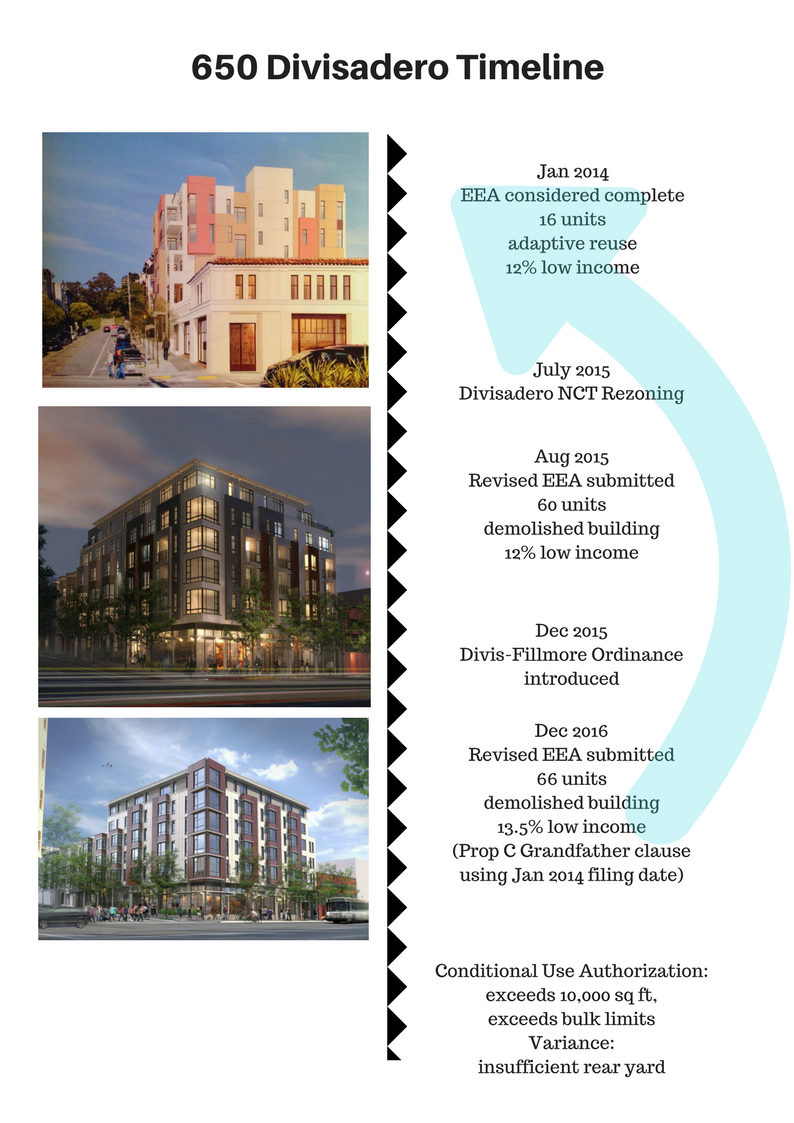